Obstructive Sleep Apnea (OSA) is the most common type of sleep apnea and affects more than 30 million American adults. 1/5 adults have mild OSA and 1/15 will have moderate to severe apnea. It is reported that 80% of patients with OSA are undiagnosed. In addition, 10-20% of children who habitually snore will have sleep apnea. Sleep apnea is now reported as the fastest growing epidemic in the United States.

Obstructive sleep apnea occurs when the airway is blocked by the soft palate in the back of the throat or from the base of the tongue as the soft tissues relax during sleep. Repeated efforts to breathe are unsuccessful leading to a drop in oxygen levels. The breathing pauses are followed by brief unconscious awakening that disturbs one’s sleep. These episodes can interfere with sound sleep, reduce the flow of oxygen to vital organs, and cause heart rhythm irregularities . OSA is linked to a multitude of health conditions and is one of the leading causes of heart attack and stroke. Diagnosing and treating sleep apnea is therefore essential.

The following are known some of the more recognized potential consequences of obstructive sleep apnea:

The signs and symptoms of sleep-disordered breathing and eventually apnea can be seen in mouths and facial presentation as early as infancy.

OSA can affect men and women of any age and even children. Although obesity is a major risk factor for OSA, it is a misconception that only obese snoring men have OSA. OSA can be found it, patients, who do not snore, who have thin body types and are female or children. Even healthy presenting fit athletes can be diagnosed with sleep apnea.

Often the presentation of OSA is associated with similarities in oral facial development that are often first recognized by dentists. This presentation includes small deficient jaws, vaulted narrow palates, nasal obstruction and abnormally enlarged tonsils among others.

Therefore, the signs and symptoms of sleep-disordered breathing and eventually apnea can be seen in mouths and facial presentation as early as infancy. However, OSA tends to become more prevalent in the population as we age. Although it is more common in men before the age of 65, women tend to catch-up to the men after menopause. Women are the most undiagnosed group with sleep-disordered breathing.

If you experience the following symptoms, your dentist can help screen you for sleep-disordered breathing and if necessary consult your health care provider in order for a referral to a qualified sleep medicine specialist.

Persistent or irregular snoring, particularly if associated with pauses or gasps

Symptoms in children may not be as obvious and include:

Especially in children, evaluation by other professionals, such as ENTs, is imperative towards the treatment of sleep-disordered breathing involving snoring. Often early interventions such as removal of adenoids and tonsils and restoration of nasal breathing along with participation in myofunctional therapy are also crucial towards resolving sleep-disordered breathing in children. Lifestyle modification should be addressed in all patients who snore, including reduction of risk factors such as obesity, alcohol consumption, tobacco use, and use of muscle relaxants and even sleep hygiene. However, in some children, CPAP, further surgery, allergy assessment, palatal expansion, or specialized orthodontic treatment may be necessary to treat the OSA.

The latest recommendations from the American Academy of Sleep Medicine: 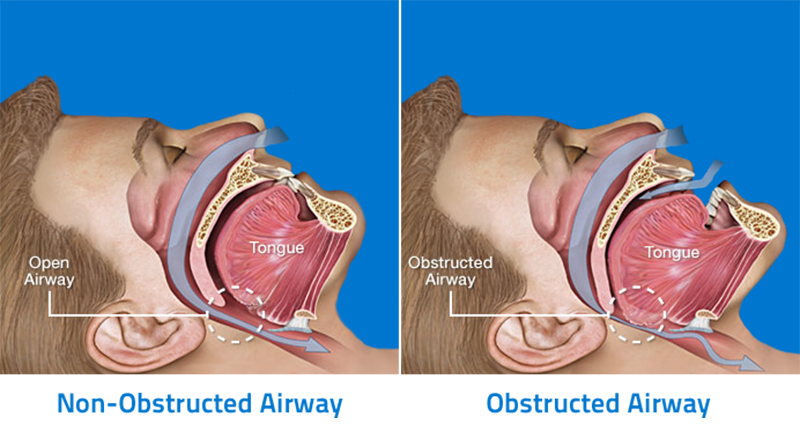 The definitive diagnosis of obstructive sleep apnea is interpreted by a sleep doctor base an overnight sleep study. This test is called a Polysomnogram . It will chart a patient’s brain waves, heartbeat, and breathing during sleep. It also records arm and leg movements. Traditionally this has been in a sleep center (an “attended study”), but home sleep tests are becoming more common due to convenience and financial considerations. The sleep study will take into account the number of partial (hypopnea) or complete (apnea) cessation of breathing for greater than 10 seconds. Last, the sleep study will monitor the blood oxygen saturation level using a pulse oximeter.

Other sleep disturbances such as RERAs or arousals can also be identified during a sleep study. Recent literature has stressed that these arousals are just as detrimental as apneas themselves. There is a strong link between heart rate and oxygen levels during sleep disturbances which is why even take home high-resolution pulse oximeter monitors are being used more commonly as a cost-effective and excellent screening tool for airway sleep disorders. At Rock Valley Dental we offer this option for our patients who are displaying signs and symptoms of sleep-disordered breathing.

Once the sleep study is concluded, an index is known as the Apnea-Hypopnea Index (AHI), combined with the oxygen desaturation level, is created and a diagnosis is made. The number of apneas and hypopneas are averaged and a score is assigned. Roughly speaking, the classification is broken down as follows:

-- Mild, moderate, and severe. What distinguishes mild sleep apnea from severe is simply your blood oxygen level and the number of episodes you have per hour. The more episodes, the more severe your apnea is considered.

When the less invasive strategies fail, the most common treatment for sleep disordered breathing including snoring and mild to moderate apnea is oral appliance therapy. Oral appliance therapy is also used with a CPAP therapy fails or is not tolerated. Research shows that oral appliance therapy is an effective treatment option for snoring and obstructive sleep apnea . An oral sleep appliance is worn in the mouth only while you sleep and fits like a sports mouth guard or an orthodontic retainer. Oral appliances support your jaw in a forward position to keep the oral airway open. Oral appliances are quiet, portable and easy to care for. When dictated, palatal expansion and or orthodontic treatment, can be used to treat sleep apnea. These can be used separately or in conjunction with other therapies for the best results. 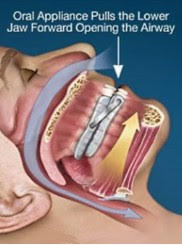 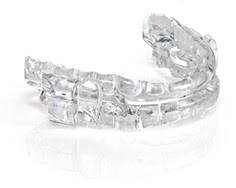 Outside of dental intervention, your doctor may recommend Continuous Positive Airway Pressure (CPAP). CPAP or other PAP therapies are the most widely known and effective treatment for severe sleep apnea and can be used separately or with possible surgical options, oral appliances, and behavioral approaches that can be used to treat OSA.

If deemed appropriate surgery is also an option. Not used as often as the other two, there are different surgical techniques employed to open the airway. The most common is the uvulopalatopharyngoplasty (UPPP), in which excess tissue in the throat is removed, widening the airway space. It is a fairly aggressive and uncomfortable procedure, and its success rate is marginal at best. Nasal surgeries to correct a deviated septum, genioplasty (tongue reduction), tracheostomy, orthognathic surgery (jaw advancement), and others are also options your sleep doctor may present. The best surgical option is likely orthognathic surgery know as a Maxillary Mandibular Advancement (MMA) in conjunction with myofuctional therapy. In most all cases it will “cure” sleep apnea versus manage it.

Dentists can play a major role in the management of obstructive sleep apnea. We work in conjunction with sleep physicians and technicians to find the most successful means to control a patient’s OSA. Oral appliances have been shown to be very effective when used properly in the appropriate cases, but we have a variety of treatment options that can be helpful in both preventing and treating sleep disordered breathing, no matter what the age.

At Rock Valley Dental, we believe that it is important to identify patients with OSA and those susceptible to OSA as early as possible in life. Opening the airway or decreasing the upper airway resistance can reduce the number of arousals during sleep, improve the ability to initiate or maintain sleep, lead to more refreshing sleep, and improve daytime alertness. Contact us today to learn more about OSA or if an oral appliance or other dental treatment options can benefit you if you have been diagnosed with a sleep disorder or have concerns about potential signs of sleep disordered breathing.

We look forward to hearing from you.

Find us on the map

Find Out When We Are Open